A new, enormous painting by artist and local community arts organizer Shawn Dunwoody is on display in the initially-ground Cameros Gallery at the Memorial Artwork Gallery.

Departing from his regular brightly-hued and uplifting murals, the new four-panel piece, titled “Unfinished Enterprise,” is stark and significant in tone. Energetic, black brushstrokes illustrate scenes drawn from images from Rochester’s civil rights uprisings in 1964 and 2020. These scenes flank a central self-portrait of Dunwoody portray his all-caps “ENOUGH” mural on Scio Street in 2020. Again then, Dunwoody tweeted a photo of it with the comment: “400+ yrs have been adequate. Ideally some can begin to see the real truth #blacklivesmatter.”

“It’s really just hoping to find these moments to inform the tale of the identical shit which is still likely on,” Dunwoody claims of his new work. “Nothing’s definitely changed.”

Finished in the early months of 2021, “Unfinished Business” is a reflection on the demise of Daniel Prude at the arms of Rochester police, and the unrest that erupted when the facts of his death came to light-weight. The painting was initially displayed as portion of “Black Lives Make any difference, a Sanctuary for Daniel Prude” at The Black Residence, the place Magazine Director Jonathan Binstock observed it in Could. He advised that Mag curators just take a search at the work.

“Unfinished Business” shares the room with a portrait of the city’s namesake and slave owner, Nathaniel Rochester, the maquette for modern day artist Alison Saar’s “Swing Low” sculpture of Harriett Tubman, and early paintings of the Genesee Valley location.

Jessica Marten, the museum’s curator of American art, claims positioning the operate amid the collections of 19th-century American artwork built feeling for the reason that it depicts Rochester’s background. ,

“This is an historic second that he’s captured,” she suggests. “And it was his intention to glimpse back at 1964 and at 2020, and mirror on what is the same, what has not adjusted about that time.”

“Unfinished Business” will continue to be on view at the Magazine via August.

Tue Jan 25 , 2022
Tribe Sankofa, a doing arts collective of multi-gifted, vivid and eclectic performers, will celebrate their 10th anniversary this year. The team options to execute a series of gatherings reflective of their main values, although celebrating the milestone and having to pay tribute to their allies and supporters, who, by the […] 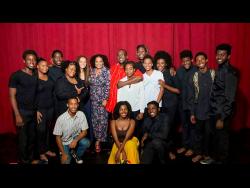