Local artist Meredith Andrews has donated $30,000 to Keep Bermuda Beautiful [KBB] and the Bermuda National Gallery [BNG] through proceeds from her recent art exhibition highlighting the impacts of modern living on ocean pollution.

A spokesperson said, “In 2021, Keep Bermuda Beautiful [KBB] and the Bermuda National Gallery [BNG] were looking to collaborate on an exhibition that would feature art aimed at raising awareness for environmental issues. KBB and BNG reached out to Bermudian photographer Meredith Andrews because of her work with ocean plastics and she generously agreed to create a unique series for the exhibition. Flotsam and Jetsam: The Cost of Modern Living emerged as a result of Meredith’s collaboration with KBB and BNG.

“In 2020, Meredith was awarded the Queen’s Certificate and Badge of Honour for services to the environment. The artworks in Flotsam and Jetsam: The Cost of Modern Living were born from Meredith’s passion for the environment and her stewardship in combating ocean pollution, specifically the negative impact single-use plastics are having on our entire planet.

“Meredith’s striking collages are made from plastic debris the artist has collected from Bermuda’s shoreline. Through this exhibition, Meredith has created beauty out of chaos and brought the ramifications of our 21st century throw-away culture to the forefront.

“The exhibition, held at BNG from November 2021 – April 2022, was a huge success and the featured works won Silver in the prestigious Association of Photographers’ Open Awards [AOP]. A series of limited-edition prints, numbered and signed by the artist, are available for purchase.

“Part proceeds from the sales are being donated to KBB and BNG. The public’s incredible response to the exhibition has, so far, raised $30,000 for the two charities, with each organisation receiving a donation of $15,000.

“KBB and BNG are forever grateful to Meredith for her generous donations and for her tremendous contributions to the environment. These much-needed funds will support education and arts programmes for KBB and BNG.

“The donations will also boost efforts to educate the public on the toxic consequences of single-use plastics, which are choking our delicate marine environment and wreaking havoc on human health, both locally and globally.

“KBB and BNG sincerely thank Katie Berry, former Executive Director with KBB, for her work on this project; Zurich Bermuda, who provided support for the exhibition; Loris Toppan at Colourlab Bermuda for the printing of the artworks; and videographer Moss for producing the accompanying video, which can be viewed at kbb.bm and bng.bm.

“Thank you, as well, to the individual and corporate buyers who purchased a limited-edition print, including the Hamilton Princess & Beach Club, where Meredith’s piece will be displayed amongst the hotel’s exquisite collection of art.” 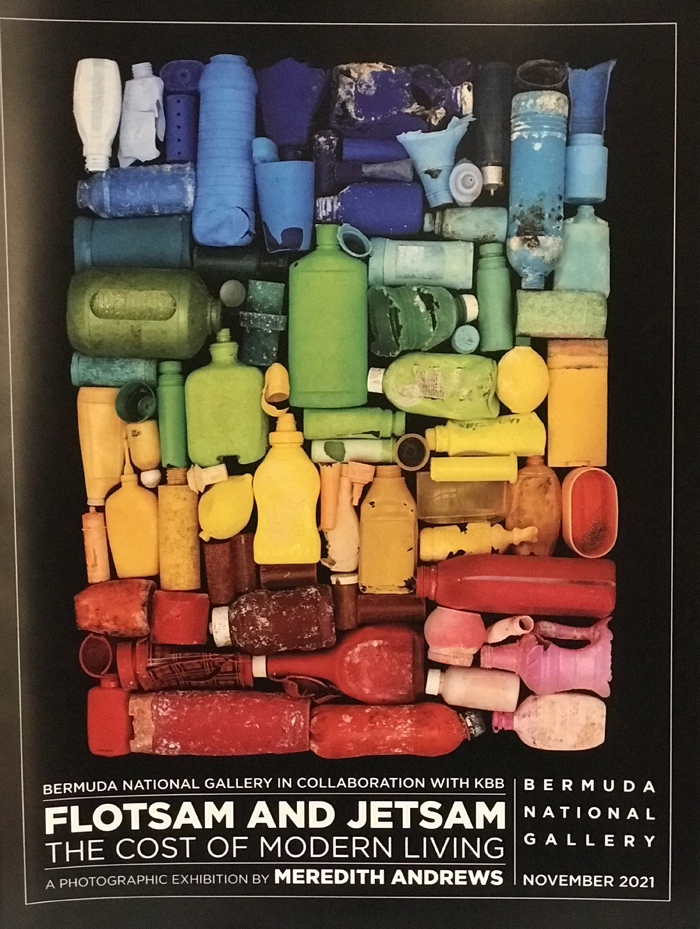 Ms Andrews said, “I am a passionate advocate for environmental protection and preservation, especially our oceans. Bermuda’s unique position in the Atlantic gyre makes our island a huge catchment for swaths of ocean plastics that become trapped in sargassum and wash up on our beaches every day.

“It makes for a plethora of material to work with when I am creating my artwork, especially collections that are aimed at raising awareness to combat this problem, here in Bermuda and around the world.

“Donating part-proceeds from the Flotsam and Jetsam: The Cost of Modern Living exhibition was one small way that I am able to give back to two phenomenal local charities who are battling the ocean pollution epidemic and making a difference throughout Bermuda and beyond.”

Marcia Browne, KBB’s Vice-President of the Board, added “On behalf of KBB, we would like to thank Meredith for her ongoing efforts to make the public aware of how every-day plastics are polluting Bermuda’s beautiful coastline, endangering the delicate marine environment and choking the world’s oceans.

“Meredith is a good friend to KBB, and we are extremely grateful for her generosity in sharing the proceeds from this award-winning exhibition. We appreciate BNG for their collaboration and significant efforts with this special fundraising project, and thank members of the public for their tremendous support of the art exhibition. Together, we have produced phenomenal results, all whilst promoting KBB’s mission to reduce waste and beautify Bermuda through action and education.”

Peter Lapsley, BNG’s Executive Director, stated “The opportunity to use art to shine a light on the important issues of our time is a critically important role that BNG plays in the community. The chance to collaborate with an artist of Meredith Andrews’ calibre and KBB, which is doing such good works throughout the community, is a best-case scenario for BNG.

“Meredith’s photography has won international awards and when you see these particular works, you will immediately understand why she is such an acclaimed artist. Meredith also brings a generosity to the way she approaches her work, which is so important. I am also struck by the fact that an individual artist has created such sizeable support for two charities, which I hope inspires others to develop innovative ways to support and work with the local non-profit sector.”

A spokesperson added, You can help raise more funding for KBB and BNG by purchasing a limited-edition print or series of your own at bng.bm/shop. Although the exhibition is now closed, it can be viewed online here. Visit kbb.bm to learn more on what KBB is doing to combat ocean pollution and how you can get involved to make a difference.”

Wed May 25 , 2022
Cost-free on the internet online games based on the Wordle concept have been multiplying in latest months. The most up-to-date in line was produced by the Countrywide Gallery of Artwork in Washington, DC, and aims to test the understanding of art lovers. This new take on the notion is termed […]