Sources close to Johnny Depp have explained why his lawyers were spotted fist-pumping when Amber Heard mentioned one detail during her testimony.

Johnny Depp’s lawyers were spotted fist-pumping when Amber Heard suddenly brought up Kate Moss during her testimony last week – because the name-drop has the potential to help their case.

The gesture by lawyer Benjamin Chew in the Fairfax, Virginia courtroom was a “celebratory acknowledgment,” a source close to Depp confirmed to The New York Post this week.

“Amber mentioned an ex of Johnny’s that clearly she felt was not supportive of him, which couldn’t be further from the truth,” the source said, in an apparent reference to Moss’ potential to help Depp’s case.

Legal experts explained that Heard mentioning Moss on the stand could give her ex-husband’s team the chance to dispel a rumour that he pushed the British supermodel down a flight of stairs when the two dated in the 1990s.

The possible slip-up from Heard came on Thursday as the actress told the jury about a March 2015 fight where she punched Depp in the face out of fear he was going to shove her sister Whitney down a staircase.

The Aquaman actress said she “instantly” thought about “Kate Moss and the stairs” — prompting Chew to turn and fist-pump.

Usually, alleged misconduct that’s not related to a specific accusation in a case — such as this rumoured incident — isn’t allowed to be brought up by lawyers at trial.

But in this instance, Heard’s mention of Moss could open the door for Depp’s attorneys to call the catwalker as a witness in order address the allegation, experts told The Post.

“[Moss] is still allegedly friends with Johnny and her testimony wasn’t allowed to come in before because it wasn’t as relevant,” said California entertainment lawyer Mitra Ahouraian.

“That’s one mistake that [Heard] made, was bringing up Kate Moss, which potentially opened the door to [Depp’s team] bringing [Moss] on as an impeachment witness,” — and Moss “saying ‘this never happened,’” Ahouraian explained.

Halim Dhanidina, a former California judge and current criminal defence lawyer, agreed that Depp’s team could now try to use the Moss mention to their advantage.

Dhanidina said Depp’s team could say, “You brought up Kate Moss and she wasn’t going to be part of this trial but now she is.”

“Johnny Depp’s team is going to argue that they should be permitted to call her to debunk any rumour about Johnny Depp pushing [Moss] down stairs,” he said.

Heard’s side could then counter that the Moss statement was meant to explain Heard’s “state of mind” when she hit Depp, Dhanidina said.

Her attorneys could argue that “there is no need to bring additional evidence about Kate Moss to have a side trial on this other incident,” the former judge said.

At the very least, Depp’s side will likely cross-examine Heard about the Moss comment.

Dhanidina explained that the judge on Depp’s case, Penney Azcarate, has “a lot of discretion” on whether to go further and let Moss testify.

Heard previously made an allegation that the Pirates of the Caribbean actor had shoved Moss down a flight of stairs during Depp’s other defamation trial in the UK in 2020.

Describing the same fight involving her sister, Heard told the British court at the time: “I remembered information I had heard [that] he pushed a former girlfriend — I believe it was Kate Moss — down the stairs. I had heard this rumour from two people and it was fresh in my mind.”

If the judge in the ongoing trial does allow this allegation to come into play, that could also open the door for Depp to bring up past accusations of misconduct against Heard.

“To me the more interesting question, is whether the mention of [the Moss allegation] or the rumour of that incident entitles Johnny Depp’s team to bring in evidence of Amber Heard’s prior domestic violence conduct,” Dhanidina said.

“If you go outside the bounds of the conduct in this case to include other violent conduct committed by your opponent, it’s only fair for your opponent to be able to do the same for you,” the lawyer said.

In 2009, Heard was charged with domestic violence against then-girlfriend Tasya van Ree – who later came out saying that the incident was a misunderstanding and that the charges against Heard were quickly dropped.

What Ukrainian Kids Are Drawing in One Zoom Art Class

Thu May 12 , 2022
Picture Illustration by Thomas Levinson/The Daily Beast/Getty/Ksenya Litvak From Ukraine, 4-12 months-aged Bronco provided a child’s look at of the circumstance there to the instructor of his Zoom art course. “Ah, you know war is not a difficulty,” he stated. “The challenge is the suppliers are shut and there is […] 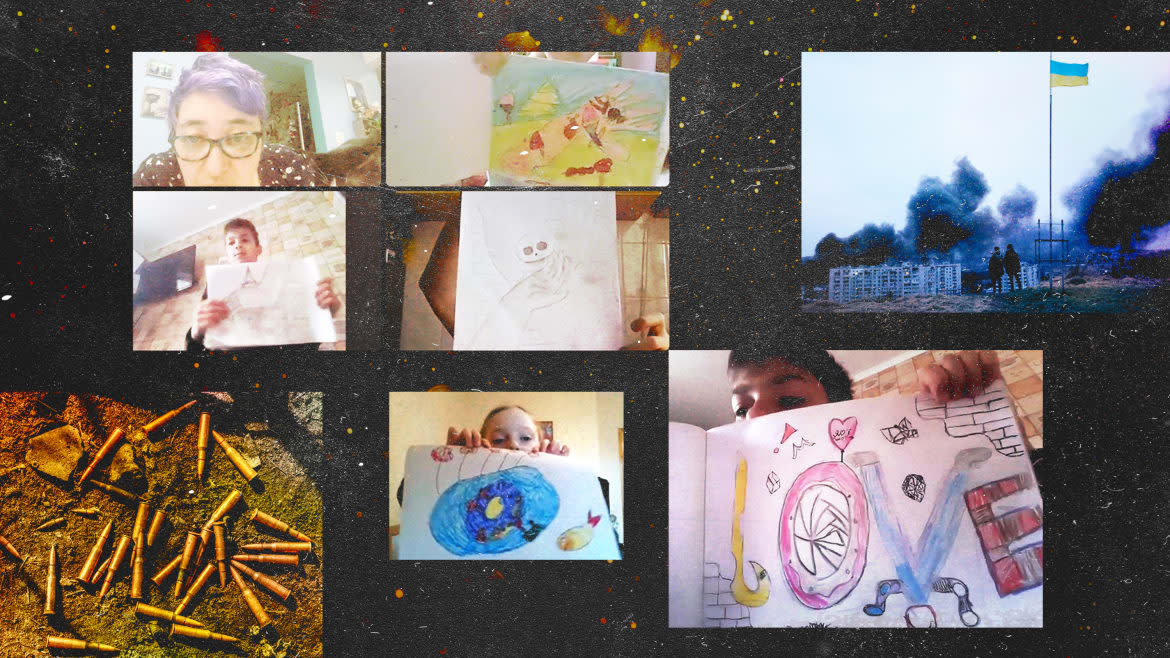