When Tsehay Hawkins got the call to join one of the most popular and enduring music groups in the world, it seemed unbelievable. The 15-year old knew she’d soon be performing to millions of fans, not only in her home country of Australia, but around the world.

That most of those fans will have barely started preschool did nothing to dim that excitement.

“I think if it was out of ten, I would be at 100 to be honest,” Hawkins told CBC News. “It’s honestly surreal. It’s a dream come true … I’ve been obsessed with the Wiggles ever since I was little, so it’s amazing.”

“I got so many friends saying, ‘Oh my gosh, my kids are going to watch you on TV.'”

The children’s group formed in Australia in 1991 with four members — who individually sport purple, red, yellow and blue — and quickly became an international sensation. They perform as a live touring band, on television and through social media platforms, alongside a host of costumed characters.

WATCH | What it means to be a Wiggle:

Hawkins, who will now inherit the role of the “yellow Wiggle,” will be the group’s youngest member ever and the first woman of colour to join its main cast. She will also bring her talents as a dancer — Hawkins is the current Australian and World Youth Ladies Salsa and Urban Latin champion, and has won four world titles in Latin and commercial dance.

Hawkins says she started dancing because of the group. Born in Addis Ababa, Ethiopia, Hawkins was adopted at seven months and raised in Australia. She soon discovered the Wiggles, and danced constantly to their music, prompting her parents to put her in dance classes.

The Wiggles are on hiatus from live performances, shifting instead to Facebook and Instagram Live, but their dominance in the preschool entertainment scene hasn’t faded. With over 30 million albums and DVDs sold — and more than one billion music streams and two billion YouTube views — their reach and audience is nearly unparalleled.

But after coming under fire for a comparative lack of representation, in both race and gender, the group brought on four new performers. That included Hawkins, Aboriginal Australian Evie Ferris, Chinese-Australian Kelly Hamilton and Filipino-Australian John Pearce.

The Wiggles said the change was to “better represent today’s Australia … while enabling children worldwide to see themselves reflected on the screen.”

Hawkins says the opportunity to be an example for children is hugely important to her. She hopes to showcase and share her interests in everything from Harry Potter to hip hop, salsa and shuffle dancing.

But she also hopes to make kids feel comfortable with who they are, and proud. She says she would often see other African kids straighten their hair, thinking their natural style wasn’t pretty or acceptable.

Hawkins has never straightened her hair, and hopes appearing with the Wiggles with her natural curls will help other children do the same.

“A lot of young Black kids … just want to be like people on TV, and they try and change how they naturally look,” she said. “[But now] I’ve seen photos of little girls already dressing up with their little mini afro puffs, and it makes me so happy.”

Hawkins will be replacing Emma Watkins — a member of the main cast for nine years, and the Wiggles’ first female member.

Watkins said the thing she will miss most is connecting with families and children. The show helped her build a platform for outreach and discussion, she said, including her work with the deaf community and on endometriosis awareness, a condition she was diagnosed with midway through her Wiggles career.

But when it comes to Hawkins taking over her role, Watkins says she’s nothing but excited.

“Tsehay and I spoke on the phone the day before she was announced, and I was just saying to Tsehay to really take this opportunity with everything that she has,” Watkins said.

“I really hope people will welcome and warm her into this beautiful community.”

Thu Nov 4 , 2021
Michaela Antoinette will be keeping an artwork exhibition entitled ‘Infinity Collection’ [Part 1] at The Bermuda Modern society of Arts, with the grand opening to choose spot on Friday, November 26th, managing right until December 15th. A spokesperson stated, “What a journey it has been for Bermudian mystic visionary artist […] 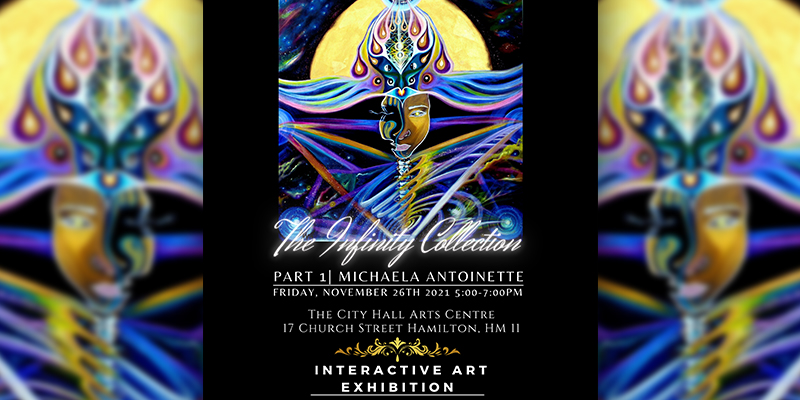