LadBaby are going for a record fourth UK Christmas number one in a row – with help from Ed Sheeran and Elton John.

YouTube stars Mark and Roxanne Hoyle have raised money for the Trussell Trust food bank charity with their sausage roll-themed singles since 2018.

This year’s attempt is a cheeky version of Ed and Elton’s Merry Christmas, called Sausage Rolls For Everyone.

LadBaby could overtake the Spice Girls and Beatles as the act with the most consecutive Christmas number ones.

The Beatles had three in a row in the 1960s and the Spice Girls achieved the same feat in the 90s, with LadBaby matching the record over the past three years.

Sheeran was the last artist before the Nottinghamshire couple to have a festive number one, with his 2017 love song Perfect.

The star said he was “proud” to be supporting and featuring on LadBaby’s single this Christmas.

“All profits will be donated to The Trussell Trust, which is a very wonderful and important charity, so make sure you stream it, buy it and play it on repeat,” Sheeran said.

In a statement, Hoyle said: “Ed and Elton are pop royalty and they’ve both had huge success at Christmas, so we’re honoured and excited to be coming together to help families this Christmas… with the power of sausage rolls.”

The charity song will be released on 17 December, but bookmakers have already made it odds-on favourite to top the festive charts.

Proceeds from Ed and Elton’s original song are also going to charity – split between the Ed Sheeran Suffolk Music Foundation and The Elton John Aids Foundation.

But the stars face tough competition this year, with Gary Barlow, Abba and Adele all in the running for the festive chart; and perennial favourites from Mariah Carey and Wham! already in the top 10.

Here’s a guide to all the contenders.

No cliché is left unwrapped in this gaudily-decorated ode to gathering around the tree and kissing under the mistletoe.

The video pays homage to dozens of Christmas classics from yesteryear, recreating scenes from Last Christmas, Walking in the Air, Stay Another Day and the David Bowie/Bing Crosby duet Little Drummer Boy.

Released last Friday, it amassed 46,265 sales in its first five days and is almost certain to headline this week’s Top 40. But can it withstand LadBaby’s sausage roll assault? The proof is in the Christmas pudding.

LadBaby, Ed Sheeran and Elton John – Sausage Rolls For Everyone

As above, but with a flaky pastry coating.

Comedians Adam Rowe and Dan Nightingale have a running joke on their Have A Word podcast, in which Dan is told his wife, Laura, has left him.

Dan replies with “Where’s she gone?”, with the hosts and their guests trading increasingly bizarre tales of Laura’s suave new suitors and their globetrotting adventures.

That, somehow, has become a song, written and performed by the duo’s producer Finnlay. Presumably funny if you’re in on the joke, it otherwise sounds like a Stereophonics b-side.

Dan and Adam are supporting a good cause, though, with all proceeds going to Zoë’s Place Baby Hospice, which provides palliative care for terminally ill children, and the Childhood Eye Cancer Trust.

Adele – Easy On Me

Adele’s comeback single has been sitting atop the charts for the last seven weeks, in the face of heavyweight competition from Ed Sheeran, Taylor Swift and Dua Lipa.

With streams of the album going strong, the track could hold on for Christmas – but a quirk of the chart rules might make that harder.

In order to stop old songs clogging up the top 40, compilers have a ruled called “accelerated decline”, which says if sales of a song decline for three weeks in a row, it needs 300 streams to count as one “sale”, instead of the usual 150:1 ratio.

Sales of Easy On Me decreased from 100,627 to 69,372 last week. If the trend continues, Adele will go into accelerated decline just in time for the Christmas chart.

Even without that penalty, her current sales are no match for the 157,733 singles LadBaby sold in Christmas week last year, so her chances look slim.

Mariah Carey – All I Want For Christmas Is You

She’s been asking for 27 years, but Mariah Carey still hasn’t got you in her stockings (oh shush).

But what she does have is the chart equivalent of Coca-Cola’s “Holidays are coming” jingle. Christmas only really starts when her tinselled tonsils appear on the radio.

A perennial presence in the Christmas top 10, it reached number one for the first time last year, only to be deposed by LadBaby before the big day. It’s already in the top three this year, even though chart rules dictate that old songs have their streaming tallies halved when calculating the top 40.

There’s too much competition for her to reach the summit this year. However, she’s all-but-guaranteed a top five finish.

Earlier this year, Wigan band The Lathums beat Drake to number one with their debut album, How Beautiful Life Can Be. Now, they’re hoping to score a similar upset on the Christmas charts with their festive offering.

Technically an anti-Christmas song, it’s set at the end of the world, with frontman Alex Moore singing: “Santa ain’t coming this year / Your Christmas will be cancelled anyway.“

Inspired by an episode of the BBC Two comedy series Inside No.9, the darkness of its lyrics are offset by a jangly Merseybeat shuffle.

If you like your Christmas pudding with a dose of salt, this is the one for you.

Amazon Music has been commissioning new Christmas songs for a couple of years now, adding them to their festive playlists and staging sneak attacks on the top 40.

The tactic has already produced a number one single, in Ellie Goulding’s 2019 cover of Joni Mitchell’s River. This year, George Ezra has recorded a new version of Charles Brown’s Come On Home For Christmas.

Recorded in September, while wearing a Santa outfit, Ezra said the song’s message struck a chord after the tribulations of 2020.

“Last year was the first Christmas I’ve experienced where, completely out of anyone’s control, we weren’t able to see the people we would hope to see. I think that’s something that resonated when choosing the song.”

Come On Home For Christmas is poised to enter the top 10 for the first time this week.

Until this year, Abba’s only Christmas recording was a brief greeting on a Smash Hits flexidisc called Happy Christmas From The Stars, in 1982.

That changed when they emerged from retirement in September to announce Voyage, their first album in 39 years.

Track three is Little Things, a gentle ode to waking up early on Christmas morning in anticipation of the children opening their stockings.

Despite the presence of recorders, glockenspiels and a children’s choir, Benny Andersson initially didn’t consider the melody for a Christmas song, said co-writer Bjorn Ulvaeus.

“But the minute I heard it, I said it cannot be anything else. It is early, early Christmas morning. The stockings are hanging right there and then this couple wakes up.”

Gary Barlow & Sheridan Smith – How Christmas Is Supposed To Be

In 1993, Take That were robbed of the Christmas number one by Mr Blobby. Now, Gary Barlow has returned with a whole album of Christmas songs, titled The Dream Of Christmas.

The lead single is How Christmas Is Supposed To Be – a duet with Sheridan Smith, which finds them trading barbs (“I’ve given all I’ve got / You’ve given me nothing“) as they decorate the Christmas tree. It’s no Fairytale of New York but your mum will like it.

Gypsy Pistoleros are basically the Flamenco version of Kiss – a sleazy glam-rock band wearing Day of the Dead make-up.

Their bid for Christmas number one is a retread of Livin’ La Vida Loca that trades the original’s camp joie de vivre for dreary pub band clichés.

The song’s most redeeming quality is that the proceeds go to housing and homeless charity Shelter.

An early publicity campaign helped it gain favourable odds, but with the video only attracting 20,000 views in the course of a month, its ranking has slipped.

The first ever Children In Need Christmas single comes courtesy of CBeebies’ longest-serving presenter, Andy Day, and his band the Odd Socks.

The story goes that “Pudsey himself set the challenge for the band, asking them to come up with a catchy Christmas single that will raise money for the appeal”.

They plumped for a cover of Shakin’ Stevens classic Merry Christmas Everyone. Shakey himself makes a cameo, after figuring out what’s behind the green door (of his advent calendar).

More on this story

Taylor Swift to face trial in Shake It Off copyright case

Sat Dec 11 , 2021
“In the early 2000s, preferred tradition was sufficiently suffused with the principles of gamers and haters to render the phrases ‘playas… gonna play’ or ‘haters… gonna hate’, standing on their have, no extra imaginative than ‘runners gonna run’ ‘drummers gonna drum’ or ‘swimmers gonna swim,'” he wrote. Related Posts:Elton John […] 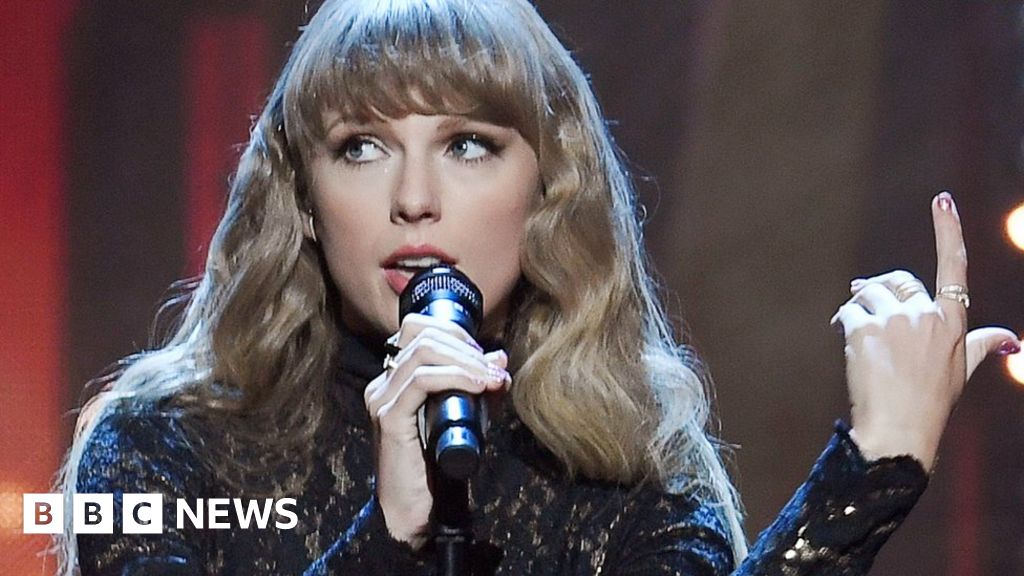