This is a fingers-crossed fall arts preview.

No one can predict the future with the delta variant surging. But, for the time being, area arts venues are pushing forward with best-laid plans for fall exhibitions — and if you go, you’ll be glad you did.

Many installations reflect artistic responses to the ongoing pandemic and social justice reckonings. As long as there’s work to do, artists will keep it in the spotlight. But that doesn’t mean their work is a drag. Big art houses and small ones alike are presenting these problems in engaging ways, and complementing them with exhibits that radiate talent.

A warning: some venues won’t take walk-ins and require advance tickets, and regulations may change in the coming months.

“We’re very hopeful and optimistic that we can continue with our work, with the caveat that all will be masked,” Memorial Art Gallery Director Jonathan Binstock said. “We’re not going to take any risks.”

So keep your mask handy and call ahead before you visit to check out these not-to-be-missed shows. And check out CITY’s events calendar in print and online for more upcoming exhibitions. 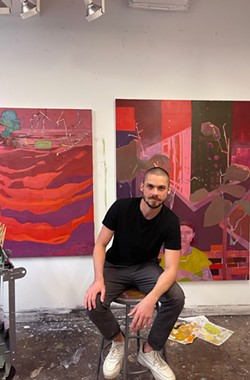 New Orleans-born, Brooklyn-based painter Dante Cannatella last showed his work with UUU Art Collective as part of “Discipline,” the 2019 NYC pop-up spotlight on emerging talent. Since then, he’s been working on his MFA at Hunter College, and had his first solo exhibition, “Heat,” last fall at Shoot The Lobster gallery in New York City.

“Nascent Digitalism” at UUU is another solo show and runs through mid-September.

Cannatella’s large canvases are moody-hued, and depict distorted, exaggerated figures seemingly caught in deep reverie, resting, or moving through indefinite environments. His artist statement suggests the landscapes that provide the backdrop to his imagery of workers, cyclists, cohorts, and bodies were inspired by his native south Louisiana.

Whatever his muse, Cannatella’s handle on the tactile nature of his chosen materials — thick applications of oil paints and oil pastels — provides plenty of texture for the eye to take in. He’s truly a natural with the balance of rich color, form, and pattern, and really, his works are just a treat to behold.

The fall season is going to be a loud one at the Memorial Art Gallery, beginning with an installation of music and text-based videos by multimedia artist and Brown University professor Tony Cokes.

Two of Cokes’s works — “Evil: Carlin/Owners” and “The Queen is Dead…Fragment 2” — will be presented in the MAG’s Media Arts Watch Gallery. The former combines read-along text from the sage ramblings of legendary malcontent comic George Carlin with the public service announcement (with guitars!) music of post-punk band Gang of Four. At face value, it’s pretty bleak, but the tunes are peppy!

Binstock says the exhibit can be heard as far away as the big Docent Gallery, where visitors can view the fine work of Dürer and his contemporaries in “Renaissance Impressions: 16th-Century Master Prints from the Kirk Edward Long Collection (opening Nov. 14). I love a good culture clash.

Cokes makes art that’s concerned with issues of race, class, gender, and power. The work also tackles the tension between reality and how things are communicated to the public through the channels of media and entertainment culture.

“It’s provocative in all the best ways,” Binstock says. “It’s not just about prompting people to think about how popular culture and politics are almost always in bed with one another, but also about how we think about language and visual aesthetics.”

Visitors are invited to vote on which of the two of Cokes’ works the MAG should acquire at the end of the exhibition’s run.

“With so much bad and strange news across social media, how is there so much joy?”

That’s the question posed in the exhibition blurb about “FEELS: A Global Emotions Visualizer,” an interactive digital-sculptural installation on view at RIT City Arts Space in September. Part of the 2021 Rochester Fringe Festival, the work gathers and visualizes emotional data drawn from a Twitter application programming interface (API).

If that all sounds pretty technical, it is. But it’s simple to interact with — each kind of emotion manifests as a holographic humanoid or non-human avatar drawn from global symbolism. It’s like taking the temperature of the global temperament. My question is: Will the machine get the interpretations right?

FEELS was developed by Rochester-based painter-turned-holographic comics and games developer Jake Adams, an adjunct professor at the School of Film and Animation at RIT.

The first time I saw a painting by Joy Adams I fell in love with her.

It was at the Memorial Art Gallery’s Biennial exhibition in 2004. There was this massive canvas presented as a rural landscape under a stormy sky, and front and center was Adams’s “Mad Sally” character: saggy and lumpy with age, idiosyncratically barefoot and wearing a winter cap, a Hitchcock-esque swarm of birds wheeling around her head and alighting on her outstretched arms. This quirky character reminded me of the “feed the birds” lady in “Mary Poppins.” I instantly fell in love with her, too. 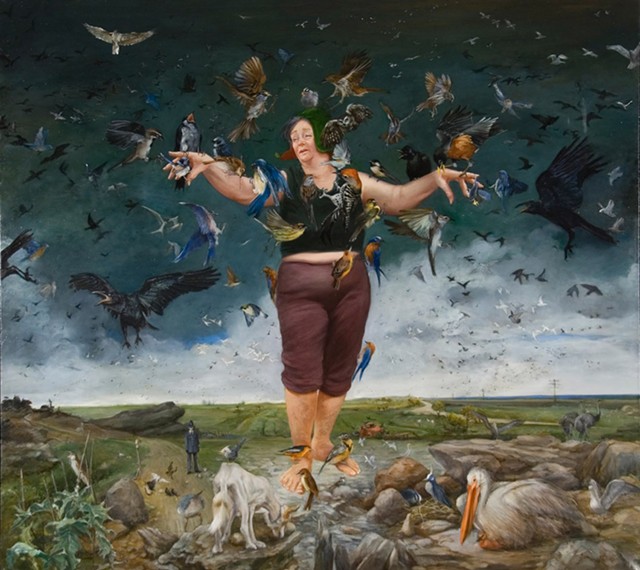 In her youth, the British-born Adams had a musical career performing with her brother and recorded with Decca and Parlaphone at Abbey Road Studios with the great George Martin before immigrating to the United States as the wife of a military serviceman. She took up painting in her 30s, studied at SUNY Brockport, taught at Ithaca College, and is now retired, living and working in a renovated barn in Trumansburg in Tompkins County. 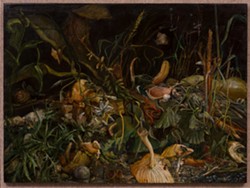 Every so often I catch a showing of her work in Rochester and the surrounding region, and my delight bubbles up anew.

This fall, her paintings and drawings will be presented in a solo exhibition at Main Street Arts in Clifton Springs. Mad Sally will be there, along with sketches of wild country rambles and deep, dark looks into life at the bottom of the garden.

Get into the spooky spirit with Rochester Contemporary’s “Messages & Mediums,” an exploration of the intersection of Spiritualism and technology in the artwork of Shannon Taggart and Matthew Ostrowski.

While Rochester sorts out its future, its past continues to inspire artists near and far. The show marks the first in what will be an occasional series at RoCo on religion, faith, and art, and is a unique take on the region’s rich history of religious subcultures, progressive social movements, and technological innovation.

Taggart is a St. Paul, Minnesota-based artist who has spent the past 20 years getting to know and photographing Spiritualist mediums. Her newest set of images were made during the pandemic, over the virtual platforms we’ve come to know so well — Skype, Zoom, and FaceTime — using the screen and camera to create and record digital séances.

New York City native Ostrowski’s “Summerland” installation blends the technology of communication from two eras — the 19th-century hardware of the telegraph and 21st-century software — and imagines a tip-tapping conversation between the medium Kate Fox, youngest of the notorious Fox Sisters, and Samuel F. B. Morse, inventor of Morse Code.

Honestly, I chuckled just envisioning this clever ghost-in-the-machine gimmick.
The exhibition is accompanied by a new text by Rochester-based historian, photographer, and librarian Gerry Szymanski. A virtual artist talk will take place at 1 p.m. Saturday, Oct. 23.

Rochester-based artist Joshua Rashaad McFadden combines his photojournalist skills with big ideas. His early 2020 exhibit, “Evidence,” hosted by Visual Studies Workshop, presented portraits of Black men with their handwritten stories and reflections on themes of identity, race, masculinity, and sexuality and the destructive impacts the constructs can have on Black Americans. The exhibition was accompanied by a newspaper in the vein of Frederick Douglass’s publication, The North Star, which McFadden produced and distributed around town.

Throughout the tumultuous remainder of 2020 and well into 2021, McFadden traveled to areas of extreme social unrest — documenting the funerals of Black men slain by police, family responses to the tragedies, marches and uprisings, and responses to the indictments of killer police. His work appeared in The New York Times and other publications.

In November, George Eastman Museum launches an early-career survey of his work. In his early 30s, McFadden is already a renowned photographer, published author, and professor at RIT.

“Joshua Rashaad McFadden: I Believe I’ll Run On” (titled after Wilson Pickett’s gospel jam, which is in McFadden’s accompanying playlist) includes work from several of the artist’s series, including “Selfhood,” “Come to Selfhood,” “A Lynching’s Long Shadow,” “After Selma,” “Evidence,” “Unrest in America,” and another autobiographical series that is to premiere at Eastman called “Love Without Justice.”
George Eastman Museum, 900 East Ave.; 327-4800, eastman.org.

Sat Sep 25 , 2021
NEW YORK (AP): With the R Kelly intercourse-trafficking trial nearing jury deliberations, a prosecutor on Thursday urged jurors to convict the R&B celebrity on federal prices that he used his superstar as leverage to sexually abuse women, ladies and boys for far more than two a long time. “It is […] 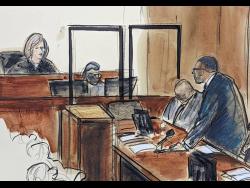