Maya Ruheza has loved ballet for as long as she can remember.

She took her first class at the age of three, after a bit of a rocky start. Her family still jokes about how, when her mom first asked her if she’d like to give dance a try, she had a frank one-word answer: “Nope.”

She relented because it looked “magical onstage — “they were pretty, they did fun twirls, they had pretty dresses on, you know” — and before long, dance had won her over.

Now, at 17, the Riverview teen is packing her bags and moving more than 5,000 kilometres away to attend one of the top ballet schools in the United States on a full scholarship.

In September, Ruheza, who is heading into Grade 12, will start two years of training at the school of her dreams, Pacific Northwest Ballet School in Seattle.

Zoom audition with 100 other dancers

“I was looking into their school and just fell in love with it immediately,” she said. “So when I saw that they were going to be having auditions, I knew that I had to do them.”

The first step was a Zoom audition with about 100 other dancers from around the world.

“Definitely different from any other auditions I’ve done before,” Ruheza said, laughing.

The next step was to film an audition tape. Ruheza and her mom, Tina Antle, shot part of it on a cellphone in their basement, and rented a room in a community centre to film the rest.

Seventeen-year old Maya Ruheza recorded her ballet-school audition in her basement but is shooting for the top on a full scholarship. 3:45

She sent the videos off, but worried that her chances of being accepted would be hurt by the fact that she couldn’t perform in person.

“I think dance, as much as it is just your body — it’s so much about your character, personality, and how you carry yourself,” Ruheza said. “So much of that is lost when you’re looking through a screen.”

While she waited to hear back, she calculated her odds of getting in to her dream school.

The program she was vying for accepts about 45 people, she said.

Meanwhile, “the whole world has the ability to audition” for it.

“So it’s definitely a small group of people that get in,” Ruheza said.

Ruheza has been preparing for this moment since that first ballet class at age three.

But the Pacific Northwest Ballet is her favourite dance company, and being accepted to their school was a moment she won’t forget.

When school officials requested a Zoom meeting, Ruheza had no idea what was coming.

They asked her why she thought the school would be a good fit, and about her plans.

At the end of the meeting, Ruheza heard the words she had been waiting for — she was invited to join the school.

“When I got off the call I was screaming like a little kid. I was so excited,” she said with a huge smile.

Much is about to change for the 17-year-old, who turns 18 in December. Ruheza is moving from Riverview to Seattle, and will live on her own while attending school.

In the meantime, she’s organizing, packing, making sure her paperwork is in order, arranging flights and confirming her living arrangements.

As with everything, there is the added layer of COVID-19 precautions to consider.

It was something that brought me joy. But I didn’t realize how much of an impact dance would have on my life and where it would take me — the opportunities it would bring me.– Maya Ruheza

Although it will be hard to leave her mother, being away for dance before has helped her prepare.

Ruheza says she’s ready, although she knows there will be some difficult times ahead.

Looking at a picture of herself in a pink tutu at her first recital, she reflects on how dance has influenced her life.

“It was something I loved to do, it was something that brought me joy. But I didn’t realize how much of an impact dance would have on my life and where it would take me — the opportunities it would bring me.”

The magic she felt watching dancers as a little girl has transformed over the years, she says, and now she can’t imagine herself doing anything else.

“This is magical in a different way,” she says. “How I feel, how it makes me feel. Dance is so good for me. That just stayed true from a young age.”

Ruheza says her next goal is a career as a professional dancer — hopefully with the Pacific Northwest Ballet.

Wed Sep 1 , 2021
Steve Marcus A look at of the Azilo Extremely Pool at the Sahara Tuesday, Aug. 24, 2021. The reworked pool place consists of a 240-foot-prolonged by 40-foot-tall LED display screen. The pool is scheduled to open up on the Labor Day weekend.Related Posts:Decades-long friendship leads to Sask. ladies recording video with […] 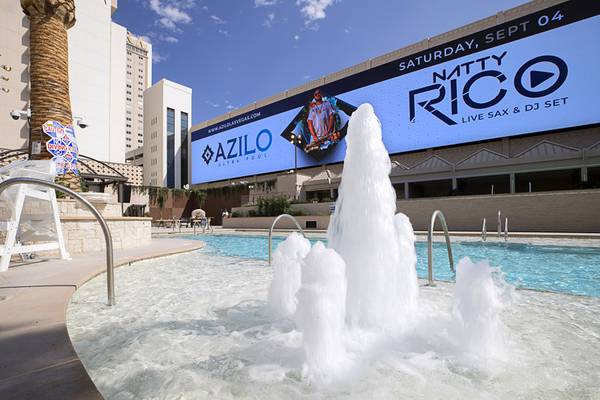