After graduating from art school and spending five years honing his artistic style while paying the bills as a restaurant host, Bradd Young has reached a milestone that many artists never hit: he’s making a living making art.

“I was kind of forced into it,” he says, jokingly. “People have just been buying more art during the pandemic.”

Young, 27, makes paintings, sculptures, and murals as “Salut,” a name taken from the French greeting and intended to convey what he calls his “approachable and light” style.

His work is whimsical, surreal, lighthearted, and sometimes strange. The world of his creation is a cotton-candy dream, where amorphous characters blend with indefinite landscapes of pastel hues and bold colors. Many of his scenes project an innocent hopefulness. 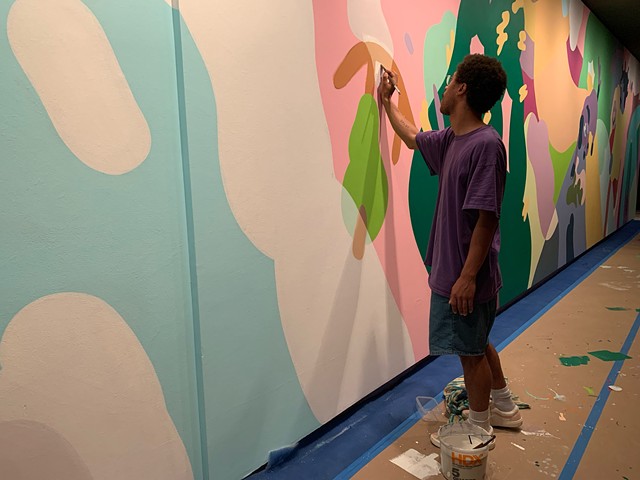 “It’s not how the real world is,” Young explains, “but it’s how I want my world to be.”

Sales of his work suggest Young is not alone in his idealism.

His work has found a collector base, and in the past year, he has been commissioned to paint murals in Rochester and Buffalo. Getting laid off from his restaurant job during the depths of the pandemic gave him what he says was a “cosmic push” onto the path he’s now traveling.

One of Young’s collectors is Rome Celli, a realtor, avid supporter of local arts, and founder of the Rochester Art Collectors group. Celli says he came to know Young’s work at solo and group shows in recent years, and now has several pieces in his collection.

“His work has an edge and it draws your attention because it’s colorful, and the figures are commonly playful, although not always,” Celli says. “Sometimes it can be rather menacing, but not in a scary way.”

A recent work features a figure in the foreground running through an idyllic, hilly terrain. Looming in the background is a blurry haze of what could either be autumn foliage or a wildfire with smoke and flame reaching into the blue sky. The work makes its viewer feel like a bystander in an alien land and keeps them in place to figure out what’s happening.

Scenes like that are what draw Celli to Salut.

“I like work that causes me to stop and think a little bit more,” Celli says. “And I like that I’m drawn in and then I’m forced to consider more deeply what’s going on in the image itself.”

In August, Young completed “Dawgs,” a mural at the Memorial Art Gallery’s Hurlbut Gallery, a stretch of hallway that for the past few years has hosted a rotating series of temporary murals. He describes the endeavor as the biggest and most daunting of his career.

At first glance, “Dawgs” looks like an abstract of different colorful shapes. But within seconds, cartoon-like figures and faces appear in the shapes. Here, a couple of giant heads are poised to kiss. Over there, a crush of identical figures tumble atop each other, leaving one to imagine the cacophony emanating from the pile. 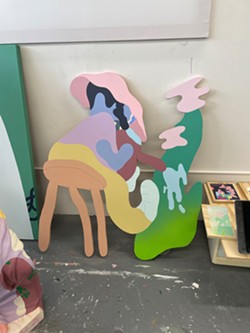 Also installed are painted wooden shapes that Young cut out with a jigsaw. That tool is relatively new, and getting a lot of use this summer as he prepares for a solo show at Buffalo’s The Box Gallery this November that showcases paintings on wood cutouts, as well as digital paintings.

Young is, in many ways, a self-taught artist. A native of Rochester, he attended school in Brighton, where he developed a self-proclaimed “irrational fascination with French culture” as a high school student. From there, he earned a degree in art at Hampton University in Virginia.

“It wasn’t an art school, but I was in the art program,” he says. “I would say it was a lot of self-teaching, and just learning what I didn’t want to do.”

Young works from a studio in the Hungerford building whose doors are painted a pastel pink. The interior is austere in the way of comfort, furnished with a beat-up, old couch and a box fan to move the stale air.

But the space brims with creativity. Finished paintings line the walls, leaning on one another. There are stacks of jigsawed and painted wood, clusters of spray paint cans, and a drawing tablet on which he sketches and does color studies.

Some of Young’s work in his studio has subtle art history references.

A replica of the ancient and armless Venus di Milo statue has been painted salmon pink with blonde hair. Her skirt looks like a Salut landscape in textile, and her face is painted like one of Young’s characters, overlapping her sculpted, stoic expression to a trippy effect.

One large painting in progress alludes to Henri Matisse’s 1910 painting “Dance,” in which five nude figures hold hands and dance in a circle on a hill. In Young’s world, that hill is a giant green face with the Pinocchio-esque nose, egg white eyes, and marble teeth.

“Whatever I do to a piece compositionally,” Young says, “I want to make it look good if it was on a T-shirt.”

Sat Oct 9 , 2021
Stewart states she was eager not to enable Diana’s memory down, conveying: “I believe to do her justice is to make it possible for her to be impulsive. Nearly anything I watched her in, irrespective of whether it was an interview, or even in a still photograph, it generally feels […] 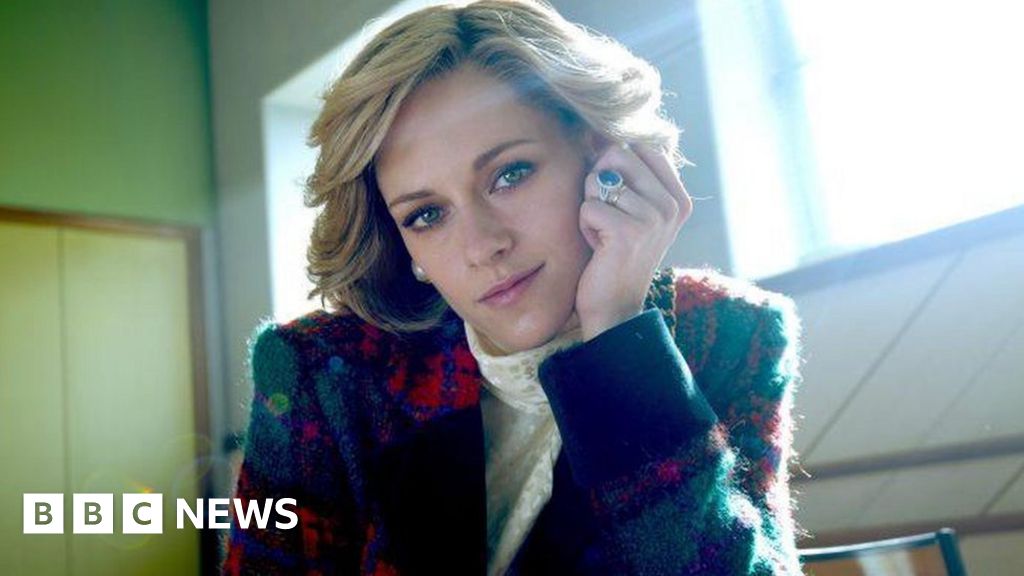