A scene in Venom: Let There Be Carnage.

Picking up after the events of Venom (2018), Eddie Brock (Tom Hardy) and the symbiote known as Venom have found an uneasy equilibrium with Venom helping to resuscitate Eddie’s flailing journalism career by aiding him on an expose of the notorious serial killer, Cletus Kasady (Woody Harrelson), while Eddie does his best to control the symbiote’s habit of biting the heads off humans by offering him a steady supply of chocolate and live chickens. When Kasady merges with his own, more powerful symbiote known as Carnage and starts causing havoc across New York, Eddie and Venom will have to come together in a way they never have before.

Despite being really very terrible, 2018’s (non-) Spider-man (non-) spin-off, Venom, proved to be a huge worldwide smash. It was something of a surprise. What is perhaps less surprising is that Sony’s biggest comic book film outside of the adventures of a certain web-slinger, has earned itself a sequel; one released just three years after the fact – though actually closer to two, were it not for the pandemic, it would have been out months ago.

Critical drubbing and low audience scores may not have stopped Venom from raking it in at the box office, but in a surprising departure from the norm, the studio execs clearly paid enough attention to Venom’s bad press to realise that a similarly rubbish sequel would probably fail to bring in the same audiences. In terms of plot, Venom: Let Their Be Carnage (hereafter known in this review as Venom 2) picks right up where its predecessor left off, but tonally the two films are worlds apart.

Venom tried to mix a bog-standard superhero story with bloodless PG-13 horror that focused on a character that, in his origin at least, really needed to be connected to Spider-man in order to work (which couldn’t happen because of Sony’s complicated Spider-man deal with Marvel Studios). It has these weird moments of goofy comedy, but mostly it just felt like a throwback superhero film that tries for gritty and edgy but mostly landed up fairly embarrassing. Fitting considering the state of Marvel comics during the early ’90s when Venom was at his most popular and Carnage was introduced to be the more “extreme” version of the same character.

Venom, the movie, might have looked OK had it been released in the late ’90s, but it really had no place in the superhero movie landscape of 2018.

Venom 2, however, clearly acknowledges its predecessor’s flaws and uses them to its own advantage. With Ruben Fletcher out of the director’s chair and motion-capture extraordinaire, Andy Serkis, in, working off a script by one of the first film’s writers (Kelly Marcel), based off a story that Marcel worked out with Tom Hardy himself, Venom 2 chucks out any attempts at seriousness, let alone grit, and triples down on the one saving grace of the first film: the weirdly effective comic pairing of Tom Hardy and the inky, oddly cheerful-looking, eponymous CGI creature who was also voiced by Hardy, channelling his inner… I don’t know, deranged Muppet? His voice strongly reminds me of something from my youth, but I still can’t figure out what.

Did the retooling work? Surprisingly, yes! Is Venom 2 a “Good Movie”? Heh, no, not really. Is it weirdly super entertaining, though? Hell, and indeed, yes!

Venom felt like an anachronism, whereas its sequel feels like a much more deliberate throwback to the ’80s and ’90s – but fewer superhero films from that era as much as those goofy buddy-cop comedies that charmingly tried and failed to cash in on the success of Lethal Weapon. Sure, the buddies in question are a bumbling reporter and the homicidal alien that lives within him, but the odd-couple chemistry is right there, front and centre. It’s corny beyond words at times like even the best buddy movies so often were, but its gleeful daftness is infectious – made all the more so by the way that everyone involved in this movie are so clearly just kicking back and having fun while waiting for their massive paycheques to clear.

Cynically, this makes for a movie that is the very definition of half-assed with its rushed pacing, barely there plotting and a throw-down between Venom and Carnage at the climax of the movie that feels weirdly low-stakes despite the power and ferociousness of the two characters. It’s a film that feels like the only thing that happens of any real significance is in its must-watch mid-credits sequence.

And yet, maybe because the star-studded cast all seem to be having tons of fun with their roles or that the whole thing doesn’t take itself seriously for a second, but I’m willing to give it the benefit of the doubt. It’s a shameless cash-in, and everyone involved clearly know that it is, but it’s a film that knows exactly what it is and has some fun along the way.

And, seeing as how the whole thing clocks in at just over an hour and a half, including credits, it never outstays its welcome, which is not something that can be said for certain other blockbusters out now.

Sat Oct 16 , 2021
LOS ANGELES – Netflix stated Friday that it had fired an personnel for disclosing private financial info about what it compensated for Dave Chappelle’s comedy particular “The Closer,” which some condemned as being transphobic. The employee, who was not named, shared “confidential, commercially sensitive facts exterior the firm,” a Netflix […] 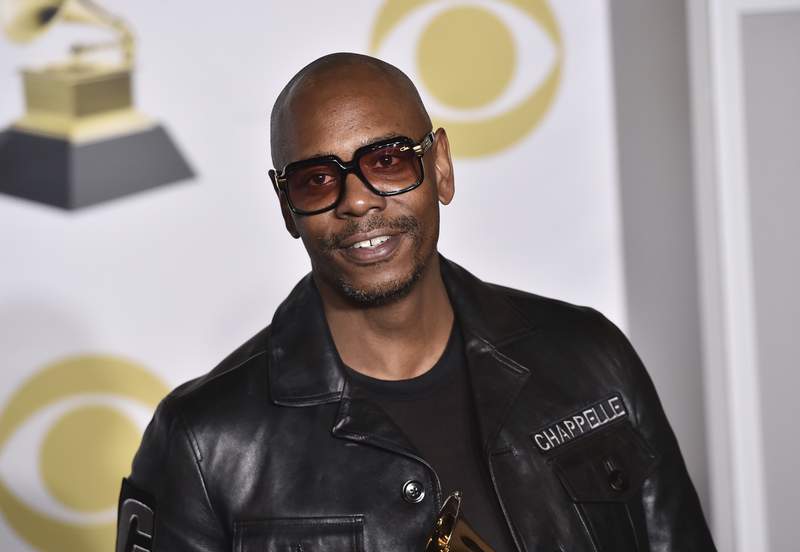